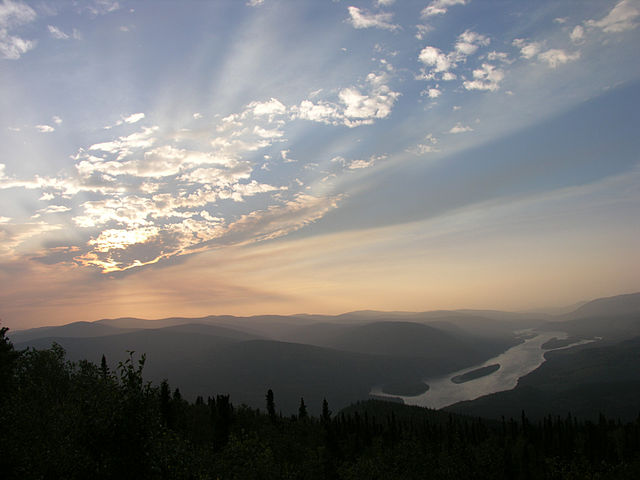 Sea to Sky Expeditions is proud to be working in conjunction with IBD Adventures and IDEAS to raise awareness of the issues people living with intestinal disease face every day of their lives. Sea to Sky is happy to be donating a percentage of each spot sold towards this worthy cause.

The Yukon is synonymous with the Klondike Goldrush, and this portion of the Yukon River highlights this more than any other. We will stop to visit Fort Selkirk, a substantial settlement from the gold rush through to the 1940s. Buildings still stand to represent a bygone era.

We will canoe past Stewart City and Sixty Mile. From Sixty Mile, Robert Henderson began the search that eventually led to the great gold rush.

And what feelings must have accompanied the gold rushers as they rounded the bend in the Yukon River and saw Dawson City for the first time. It is an anticipation that many who have made the Yukon River trip with us have expressed.

The Klondike Gold Rush was a migration by an estimated 100,000 prospectors to the Klondike region of the Yukon in north-western Canada between 1896 and 1899. Gold was discovered there by local miners on August 16, 1896, and when news reached Seattle and San Francisco the following year, it triggered a stampede of would-be prospectors.

Some became wealthy, but the majority went in vain. The Klondike Gold Rush ended in 1899 after gold was discovered in Nome, Alaska, prompting an exodus from the Klondike. It has been immortalized by photographs, books, films, and artifacts.

To reach the goldfields, most took the route through the ports of Dyea and Skagway in Southeast Alaska. Here, the Klondikers could follow the Chilkoot or the White Pass trails to the Yukon River and sail down to the Klondike. Each of them was required to bring a year’s food supply by the Canadian authorities to prevent starvation. In all, their equipment weighed close to a ton, which for most had to be carried in stages by themselves. With mountainous terrain and cold climate, those who persisted did not arrive until summer 1898. Once there, they found few opportunities, and many left disappointed.

Mining was challenging as the ore was distributed in an uneven manner, and digging was made slow by permafrost. As a result, some miners chose to buy and sell claims, building up huge investments and letting others do the work. To accommodate the prospectors, boom towns sprang up along the routes, and at their end, Dawson City was founded at the confluence of the Klondike and the Yukon River.

From a population of 500 in 1896, the hastily constructed town came to house around 30,000 people by summer 1898. Built of wood, isolated and unsanitary, Dawson suffered from fires, high prices, and epidemics. Despite this, the wealthiest prospectors spent extravagantly gambling and drinking in the saloons. The Native Hän people, on the other hand, suffered from the rush. Many of them died after being moved into a reserve to make way for the Stampeders.

From 1898, the newspapers that encouraged so many to travel to the Klondike lost interest. When news arrived in the summer of 1899 that gold had been discovered in Nome in western Alaska, many prospectors left the Klondike for the new goldfields, marking the end of the rush. The boom towns declined, and the population of Dawson City fell away. Mining activity of the gold rush lasted until 1903, when production peaked after heavier equipment was brought in. Since then, the Klondike has been mined on and off, and today the legacy draws tourists to the region and contributes to its prosperity.

We will spend time in Dawson City, exploring its rich history, visiting the original goldfields, and enjoying the period entertainment.

Participants on this tour will be asked to try and raise support for the IDEAS as individuals. Your efforts will be going almost exclusively towards a number of tangible projects (only 3% of revenue at IDEAS goes towards administration). Specifically, funds raised will be put towards a scholarship for nurses looking to specialize in this field and towards funding for a new research lab in Kelowna, BC. You will receive tax receipts for the total of all funds raised. Donations will be made directly with the IDEAS website.